Jenny and I met in London. She hosted conversations with TearFund, an NGO based in the UK, and we were invited as the leaders of Amahoro Africa. Only weeks later we’d meet up in Mombasa, Kenya for our annual Amahoro Gathering. In our times together I learned Jenny not only served TearFund, but was also a talented singer, actress and writer. She’s passionate about her neighborhood, practicing radical and gracious hospitality. We share a penchant for incarnation, as evidenced in her post on Inspiration & Incarnation. I just knew we’d connect over (prophetic) imagination, too! So how does an artist, activist and  neighbor encounter this book?

“What a commission it is to express a future that none think imaginable!”

I had never read a Walter Brueggemann book all the way through until this month; I had never dared. Finally Comes the Poet made its way into my sticky but innocent grasp some years ago and I was transfixed, exposed, entranced by its invitation.  And utterly terrified.  My hands shaking, I put it down again, two chapters in.

[“We are fearful and ashamed of the future we have chosen.”]

And now, years after buying The Prophetic Imagination for both my husband and my best mate – who both seemed to me to be in possession of that same imagination I feared I lacked – I finally turned to it myself.

Even in its early pages I heard that same, familiar song from before – a soul-deep, otherworldly chorus that gave shape to my clouded grief and my barely disguised longings.

“Yes!” I cry, from the depths of all I am, “Yes, I want to sing that song, I want to pour my whole being into its melody and sing it loud.  This is the purpose for which I was created.”  And then I weep for the slightness and inadequacy of my thin strains.

In this past month as I have inhaled Brueggemann’s words on trains and in late night snatches, I have also sat in rehearsal rooms and turned over the question of creating a new piece of theatre with our company – a piece of theatre which I must write.  What is courage, we asked, and what kind of courage leads to transformation?  I spoke from what I had read, from what was pulsing in my veins, from my desperation to be able to imagine another way to live and to be – or rather to remember it.

And I heard an unexpected echo back.

Something struck a chord in a room of unreligious artists.  They identified with the fight to imagine an alternative to the dominant narratives of our day – capitalism, consumerism, systematic inequality – and to give it a voice, a melody, an incarnation.  Have our imaginations been bought-out or is there still the possibility of a different song?

Artists often live on the edges of the empire, alive to its injustices and limitations, its blind-spots and ludicrous prejudices.  Brueggemann talks about how Jesus’ disciples are able to move towards the new possibilities Jesus embodies because they are already, by virtue of their position (or non-position) in society, “disengaged from the old ordering that is under criticism…denied riches…[and] have ended their fascination with that other ordering.”  This could describe many of my neighbours in London’s inner-city estates, but in other ways it also describes artists.  And for the artists there comes a calling to create from out of that knowing.

That is why, I realise, I am an artist.  It is the deep-down-knowing in my soul that something true must be sung out – the agony, the sham, the hope.

It terrifies me still because it matters so desperately, I believe, and I know too well the truth of Brueggemann’s confession – “I discover that I am as bourgeois and obdurate as any to whom I might minister.”  Too much of me still bears a deep allegiance to “the world of competence and competition”; I find myself competing daily.

And wrestling with it all, still.  “Our ministry will always be practised through our own conflicted selves,” writes Brueggemann.  How can this hope, this other story be somehow known to everyone on the deepest level, and yet forgotten, hidden unrecognisable?  Those “very hopes and yearnings…have been denied so long and suppressed so deeply that we no longer know they are there.”  And they take form and shape in a someone, a specific someone, the wrong someone – too quickly written off and dismissed by all of us who think we know the stories already.

This is my challenge, my calling, the one I must not shirk off.  There is a song that must be sung, and sung in hope that others will remember it too. 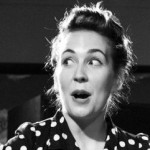 Jenny Flannagan is a writer, actress and film-maker.  Basically, she loves telling stories.  She has worked for Tearfund (a UK Christian development charity) for the past 8 years, and travelled a whole lot. She is also a founding member of the theatre company The Ruby Dolls. She lives on a council estate in inner-city London with her husband Andy, where they are trying to love their neighbours and be ‘downwardly mobile’.  They are part of The Well Community Church and lead a fledgling missional community.

<<You can still link up with your response to The Prophetic Imagination HERE.>>

Please read and comment on Jenny’s post, as well as those offered by Russ Graeff, D.L. Mayfield and Luke Harms. And don’t forget to read the post on the link up – I’ve read them all and they are wonderful reflections worth of our interaction! Also… there’s a giveaway in play. Comment on any of the above posts and be eligible to win a copy of WB sermons!