There’s just something about Emily. We met through a mutual friend on Twitter – really. But the first time I read her words I recognized the shine – she’s a gem. Emily braids together intelligent commentary, unvarnished candor and a huge hunk of humor into her reflections. She feels like your best friend after one read, drawing you close as she tells her secrets out loud, making you feel less alone. Even talking about Walter Brueggemann – she got me laughing, letting my guard down again…

Sometimes, on those rare days when spiritual practice turns into spiritual presence, I sense that God is with me.

And on those even rarer occasions when we linger together, it’s in the meadow from Twilight.

Of course there’s a romantic meadow in Twilight. Who hasn’t imagined lying in a field of flowers with their Love, unhindered by the reality of uneven ground and biting insects. Who hasn’t dreamed up a beautiful place, secluded by towering pine trees, to shelter and reconnect with wonder. I understand why Stephenie Meyer wrote her characters into that idyllic scene. It’s laughably terrible, but I understand it.

What I didn’t understand for a long time is why God meets me there. I don’t have weird romantic vampire fantasies about Jesus, but we still end up in that meadow.  It’s ridiculous.

It wasn’t always like this. My faith used to make a lot more sense.

I grew up a Baptist and as Reformed as they come. I was taught that God was found mostly in the right belief that led to the right, dutiful practice. Imagination, and even Justice, was the realm of crazy Pentecostals, liberal pretenders, and Christians who backslid carelessly into the tepid waters of New Age spirituality. Dreaming was the thing of The World, but thinking was the stuff of the people who really took God seriously.

I wanted to take God seriously, and I’m naturally inclined towards the study, the standards, and the systematic theologies. So I worked at those things, and I was good at them. Instead of Vampire Novels, I threw my teenage self into apologetics and proofs of God and correct doctrinal statements and all the American public policies that God himself endorsed. I shunned emotion and built my life out of logic. The systems were set and locked into place, of course. My parents’ generation had figured them out, and my generation was going to embrace their work and make sure we got it done for God.

There was very little left to discover, but much to obey.

But three years ago, in a fit of spiritual exhaustion, I gave up. I told God that I was done trying to love a taskmaster and critical, note-taking thought-voyeur. I couldn’t live in a world where I proclaimed that God was good, but couldn’t find any goodness in the theology around him.

I was terrified. So I threw in an asterisk: if God wanted to show up for me differently, or prove that she was different than I’d been taught, I’d listen. God, if you’re good, then show up for me. I prayed over and over.

In that bold and final act, something old died and something new began to grow.

This new faith was centered deeper in me, inviting back all the pieces of myself that I’d tried to remove. It engages my imagination, emotions, brain, mouth, and my hands.

This wild new God is consistently surprising me.

Walter Brueggemann, in The Prophetic Imagination, sets up this idea of a surprising, free God. As I blazed through the book over Easter weekend last month, I kept scribbling my own yes in the margins and circling the word free. I have experienced so much of a free God over the past few years.

For Brueggemann, this free God shows up as a contrary force to the settled and satiated social order of Egypt. The task of the Prophet, Brueggemann says, is to imagine and incite God’s alternative society where justice and compassion reign instead of placid security and control. We celebrate and energize the work that God is already doing to make things new. We do this as we marvel and wonder and live out this new reality.

This imagination and action is essential to the Kingdom of God, where we will not “have a politics of justice and compassion unless we have a religion of God’s freedom” (17). God, in wildness and freedom, shows up to invite wildness and freedom and life in us.

I keep circling around the idea of God as the “Lord of freedom.” I grew up so concerned with a God who was predictable and would act according to my expectations and behaviors. I thought I knew a God who was glorious, but could be captured in a certain set of doctrines and politics.

A free God cannot be captured like that. A worshipper of a free God trusts in something bigger than predictable outcomes. Bruggemann says of these people: “We have not yet finally given up on the promise spoken over us by the God who is free enough to keep his promises” (45). A God who is free, but shows up to show us freedom.

Understanding God as free, and myself as free in God’s image, is absolutely radical. It brings me into the kind of wonder that I can only call worship. It makes me sing a bold song and makes my heart crave Justice.

The Lord of Freedom is autonomous, dynamic, self-defining, advocating, able to attach, and capable of relating individually and corporately. That blows my mind. The un-tethered-ness of God is precisely what gives God the ability to anchor near to us.

But it is also a dangerous thing to relate freely to a free God. Sometimes you end up in unexpected places.

Sometimes, when I finally stop rushing around my days and I curl up on my bed and invite myself near to God, I imagine a meadow surrounded by trees and filled with flowers. It’s absent of vampires and vampire wannabes, but I always recognize it.

For a while I raised my eyebrows. It seemed so undignified and petty to engage my spirituality in the most vapid sort of literary images. Are you kidding me, God? I asked on multiple occasions. Why here? You’ve read Twilight and agree that it’s terrible, right?

The answer I got again and again taught me more about God than a lifetime of sitting through three hour church services: Because it’s funny and you like it.

That answer is simple, silly, engaging, and so darn personal. Of course. Of course a free God is like that. Because it’s funny and you like it.

Only a wildly free God could be that funny. Laughter, the deep kind that doesn’t slow down until your stomach hurts and you can’t breathe and snot is running out your nose, is an act of letting go. The best humor gives up control, removes structural barriers, and clears the rank airs of social formality. It’s surprising and equalizing. Laughter breaks down barriers and gives up power instead of trying to take it. It celebrates the freedom that a safe, sedated faith could never offer.

Of course a free God is like that with me, when we sit together. 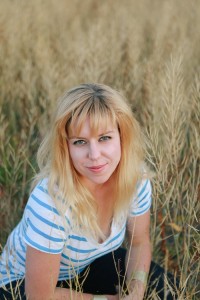 Emily Maynard is an outgoing introvert from Portland, Oregon. She is a big picture thinker who gets excited about questioning, exploring, and watching people find their voices.

She writes for Prodigal Magazine, A Deeper Story, and blogs at Emily Is Speaking Up. She is not the Emily Maynard from The Bachelorette.

It’s not too late to link-up with your reflection on The Prophetic Imagination! Come on over HERE and share with us…

And remember that today is the final day to be eligible for our giveaway: The Collected Sermons of Walter Brueggemann! So link up. Comment on any of the posts – on this website or any of our friends who linked up their responses. Each comment just increases your chance of winning…