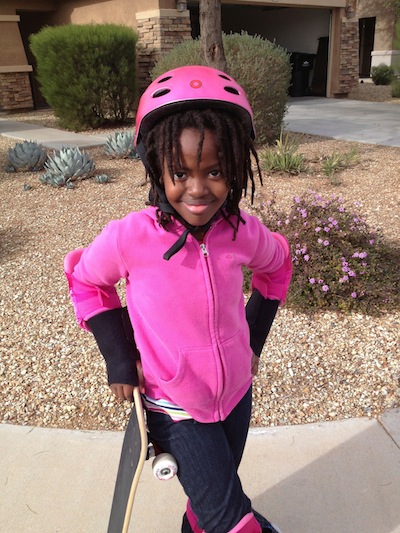 She burst into my room, darted for the bed and held fast to my side. Then an explosion of tears scattered across her chocolate cheeks. Through the breath-robbing sobs she said, “They’re mean to me, mom, so mean to me!” She looked me in the eyes and shouted, “I hate third grade! They’re so mean in third grade!” And then came the soft spoken confession – for weeks a group of boys taunted her on the playground at recess calling her ‘ugly,’ making fun of her speech impediment and even teasing her for those lovely, long dreads and dark skin.

And then my heart exploded. And tears stained my white cheeks. And all I could do was hold her tight and shower her with incessant kisses. Because it’s hard to find words strong enough to counter such meanness meted out by third grade boys.

But once I caught my breath, once her breathing had slowed and she relaxed deeper into my arms, I told her that she is beautiful, smart and strong. This is our mantra, and as I repeated it again she started to whisper the words with me. But even our special mantra couldn’t erase the hurt I saw.

My daughter is nine years old. She’s the most fearless girl I know. Brave, strong and unflappable by our bicultural life, by her own hearing challenges and learning disabilities. She works hard, delights her teachers with her constant cheer and has become quite chatty in recent weeks. But when no one was looking, boys belittled her on the playground.

As I did all the things a vigilant mother does – investigate, talk to a witness (my son), connect with teachers and such – I learned this had been happening for weeks. My daughter tried to handle this herself for about four weeks. My son said he noticed her coming in from recess crying, wiping away the tears so her teacher wouldn’t see, wouldn’t ask. See, that’s my girl, a high threshold for pain and a work ethic that kept her trying to fix this recess rumble. She mustered all the resilience she could find, until she could find no more and launched herself into my arms at long last.

The seeds of marginalization are planted this early, this young. How those boys see my daughter in her radiant blackness, dreads dancing to and froe as she runs past them. How they think they can treat someone with a hearing aid, someone who works hard to say every word. How they can so easily label her and then leave her out.

And while this happened day after day, the young witnesses stayed silent and the grown-ups didn’t see any of it unfold. So my daughter’s plight became an invisible one, and she was becoming less seen with each instance of belittling. This is how marginalization starts to happen – slow, quiet and almost unnoticed.

Until she had enough.

Until she came to the end of her own resources.

Until she decided to tell someone.

So I listened, comforted then advocated. But I knew it wasn’t enough. Because planted in the soil of her fertile heart was that seed of marginalization – the one that says your not our kind of pretty, you talk funny, you’re different from us, you’re not good enough to play with us. If I left it there, untouched, that little seed could grow roots in her soul, making her feel less than the strong, robust, vibrant girl she is. I wanted to act before those words were internalized, buried too deep to unearth.

Read the rest over at SheLoves Magazine today…