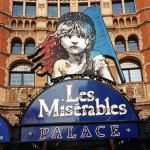 Some moments generate such momentum that song spills out naturally. Right in the middle of Les Miserables I became a gushing spring – singing aloud, waving my arms so caught in the moment and held captive by a Kingdom-size dream. In a unique way song allowed my voice to climb and try to keep pace with my soaring spirit.

No wonder Mary turned to song when the angel announced the conception of a child who would be Deliverer, King David’s heir and God’s own Son. Mere words proved too thin, too flat. So she sang…

“My soul magnifies the Lord, and my spirit rejoices in God my savior, for he has looked with favor on the lowliness of his servant. Surely from now on all generations will call me blessed… He has brought down the powerful from their thrones, and lifted up the lowly; he has filled the hungry with good things’ and sent the rich away empty.”

Mary’s song embraces the theme of grand reversal. She is a lowly woman betrothed to be married and live in some insignificant backwater town in the grip of a merciless empire. She’s like a grain of sand in the wilderness, unremarkable and unworthy of comment or consideration. And yet God sees her and selects her to be the mother of His child. She’s lifted up and given an honored role in salvific history. Her womb would gestate Incarnation and be a tabernacle for the Most High. Who would have imagined! She sensed early on that her cousin Elizabeth wouldn’t be the only one to call her blessed in the generations to come. She was lowly, but now lifted up.

Read the rest over at SheLoves Magazine today!