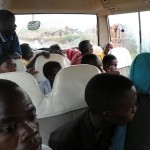 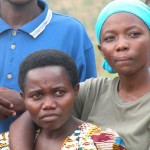 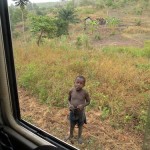 I piled on the bus with all the others, different in my whiteness, age, visibility. The teens jostled to find seats around us, excited to be selected and to be on a bus going anywhere. These Batwa boys and girls chattered away in youthful pitch, punctuated by loud bursts of laughter and occasional outbursts into song.

Today we were traveling to Bubanza together. They were selected for high school scholarships and we rode together to this Batwa village to encourage parents and inspire children to reach for education. Today they traveled not as the ridiculed ones, but as the examples of good students and future dreams for their tribe.

Careening out of the city and toward the rural roadside village, I realized that those outside the bus never thought of these kids, never showed them an iota of respect, to the outsiders these kids were invisible. I remember the word invisible stabbing me between the ribs, and hot tears striping my face.

More tears burned down my cheeks as I sensed my future tethered tighter and tighter to theirs somehow. My visibility and their lack of it connected us. My future woven with theirs – they mattered not only to God but to me and to my way of following God from this day forward. The truth seared me, irrevocable as the torrent of tears even my sunglasses could no longer camouflage.

What that baptism of tears meant scared me as I sat, no seatbelt, in the bus vibrating with a din in a language I didn’t know. I could land anywhere… though somewhere in Burundi was most likely. Still, would my tears anchor me to this country for a summer, a season, a year? What would such a mooring mean for life as I’d imagined it before I climbed onto the bus?

Through dark glasses I peered around, witnessing glowing faces and haloes of hope ringing each one. So luminous, laden with potential waiting to be tapped like hidden wells beneath layers of dirt and shale. They needed me to see, dig, stay close and share stories. (I did not know that part then.)

Something in me came awake on that non-descript bus. A bit of ubuntu I imagine, recognizing my future entwined with another’s. I knew ignoring the tears, the haloes, the future of these students would undo me. But riding with them would be a move toward our bright future.

I awoke to their world heavy with injustice, communities under threat and families without light at the end of the proverbial tunnel. I awoke to waves of compassion. I awoke to seasons of challenge (because solidarity with the poor is not all romantic and heroic, but hard as hell sometimes). I awoke to see their beauty and potential… knowing I see dimly compared to their full glory in God’s all-encompassing gaze.

Living awake these past few years transformed communities, students, and me, too.