Russ and I met in college – in Freshmen Composition, to be exact. Smart, witty, kind – he stood out in a quiet way that I admired. I remember him always thinking, often writing.    20+ years later, at The Justice Conference, we reconnected. We met up over cups of hot coffee sharing how we each forged connections with East Africa, ended up in ministry work and winded our way to a conference listening to Walter Brueggemann all these years later. Sometimes friendships continue to surprise us! Russ is now an executive pastor of a large church, and so I invited him to share his response to reading The Prophetic Imagination as one about the daily business of pastoring.

“The preacher must remember that when the congregation (or some part of it) is deeply and convincedly embedded in the dominant narrative, prophetic preaching that advocates the counter-narrative sounds like unbearable non-sense.”

This seems to be the resounding ah-ha for my personal interaction with The Practice of Prophetic Imagination as it has helped me reform, reframe and understand an experience I had from the pulpit a few years ago, which to this point, I have only partially reconciled.

I remember delivering the concepts of The Advent Conspiracy to our congregation in a sermon 3 years ago. In my narrative, the tenants were so logical and Biblical: Worship Fully, Spend Less, Give More, Love All. Shouldn’t these things be the central ideas of our celebration of the Advent of the Son of Man? Shouldn’t a call to celebrate Christmas as a act of worship, more clearly focused on Jesus, and to demonstrate elaborate acts of love to all, be well received by God’s people?

Not barely a whisper after the closing Amen of our gathering had resonated from our walls and I began to receive hate mail.

“Are you saying we shouldn’t exchange nice gifts?” “How dare you ruin and challenge my family traditions!” “You’re (sic) message is messed up. I can’t simultaneously spend less AND give more.” “I think you’re right. But I can’t do what you’re asking. My mother in law will kill me.”

I had challenged the dominant narratives of elaborate and consumeristic gift giving, and the unhealthy belief that Christmas is all about family. I left a little room for Santa Claus, but many thought I had crucified the jolly elf. And clearly, there would be no chestnuts roasting on open fires and stockings hung by the chimney with care had been incinerated. The blow back was serious!

I severely underestimated the power of the dominant narrative to which many in my congregation subscribed. I had indeed spoken “unbearable nonsense”. It’s entirely possible that my communication was not entirely clear since, unlike Jeremiah, I hadn’t received dictation from YHWH, but conveyed concepts which I knew to be honoring to The Lord. I had challenged long standing traditions and values to which many were yet unprepared to relinquish.

While reframing our understandings of Advent and our engagements with Christmas as believers is important, we have other huge issues in our days as well. I need not list them here as I’m confident these invade your prayer life already. Sadly, I fear that my grandchildren’s grandchildren will be owed an apology as a result of our deafness to our modern day imaginative prophetic poets.

Mildly, though, in our defense, I’m asking who are the poets we should attune our ears? The sheer number of voices in the common narrative and frankly counter narratives, is overwhelming! Do our poets speak in 140 character tweets? Or did our modern prophetic voices, like our beloved Brueggemann, write in 1973, but we’ve been conditioned to only consider the new and improved? Should we listen to the ideas of the musician, the artist, the scientist, or our neighbor?

It is very easy in our techno-centric society to create a voice, and a loud one at that! Some of the loudest voices within and outside the Christian subculture need to be muted and other meek, humble, and quiet voices need amplification; or more rightly, we need to learn to listen to those still small voices in this wilderness.

The call to be prophetic in our imaginations is the recognition that God always leads us forward in our relationship with Him. He does not leave us and the One who spoke creation into existence, is speaking still. 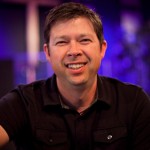 Russ Graeff is currently the Executive Pastor at Bridgeway Christian Church in Rocklin, CA. He has been a husband to Cindy for 21 years & a father to Ashley for 12. He serves on the board of Yaaka Afrika, an organization that champions the needs of children in Uganda. He’s also served on the board of Courage Worldwide, an organization fighting for the victims of sex trafficking & exploitation & restoring their identity as valued children of God with a purpose. In his free time, he enjoys cycling, triathlons & his terriers Fritz & Brooke.