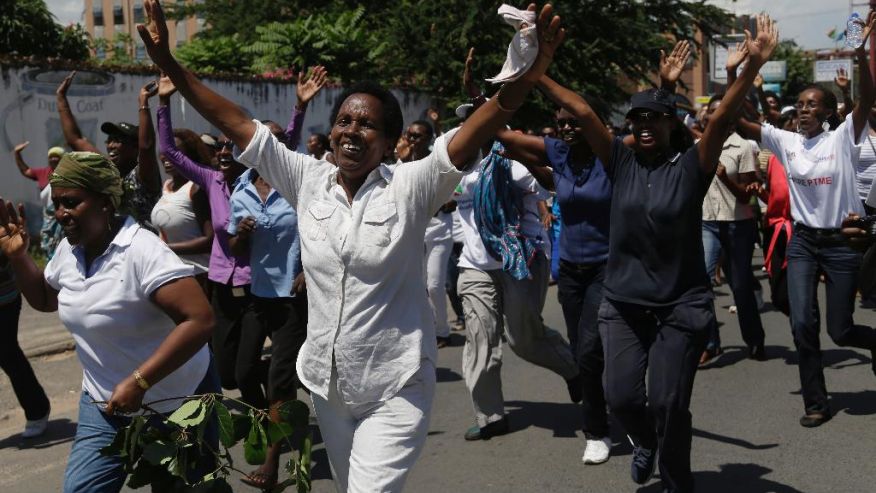 On Mother’s Day the women of Burundi took to the streets.

Recent weeks have brought conflict onto these very streets – protesters, police, tear gas, water cannons and even live ammunition – and dead sons. The president continues to push for an unconstitutional third term that will break the Arusha Accords peace agreement and possibly ignite another season of ethnic violence. Meanwhile, the economy crumbles. The most vulnerable ones feel the insecurity first, the economic loss first, the pangs and cost of violence first.

So on a quiet Sunday morning 300+ women walked the winding roads of Bujumbura right into the heart of the city. They prayed with their feet. They sang. They danced. They defied the no-protest order issued by the government just the day before.

They sang “Jesus is the Savior” – their inflection clearly stating the current president was not the savior of this land. They reminded me of the early Church declaring “Jesus is Lord” – and Caesar is not. They refused to be silenced with each step and every song.

Undeterred the women marched to the city center – the first protesters yet to reach this symbolic location. At the heart of the city stood the women in peaceful opposition to the violence of previous days. They sang the National Anthem declaring their love for their people and their homeland.

These women confounded and confused the police. The order was no protests. They had canisters of tear gas in hand. They were ready to break up any group… but they never expected hundreds of mamas on a Sunday morning. They were caught off-guard. (Why does Pharaoh always underestimate the women?)

On Mother’s Day the women of Burundi marched for peace – and showed the truth of motherhood.

These women – mothers, aunties, sisters and daughters – rallied. They came out to stand for all the futures to be had in Burundi for all the sons and daughters of all the neighborhoods and provinces across this land. They did not only march for their child – but for everyone’s children.

These women know that every neighborhood must be bound by peace and rid of violence (including the predatory economic kind). They know as long as some sons are shot, all sons live in peril. They know that when certain streets are blockaded, no one has the freedom of movement. They know when one hundred policemen demolish a neighborhood with their weapons and bullets; no other neighborhood can claim safety.

And how deeply they know that when one pregnant woman is dragged from her home and through dirt roads threatening her life – no mother walks free from fear.

These women showed me a mothering wide enough to embrace a nation. They taught me that motherhood isn’t just about my children, but all our children together and all their futures.

Today I honor these women. Today I want to be a Burundian mother.

11 thoughts on “Mother’s Day in Burundi”