{ Deeper Story: how to melt swords into plowshares } 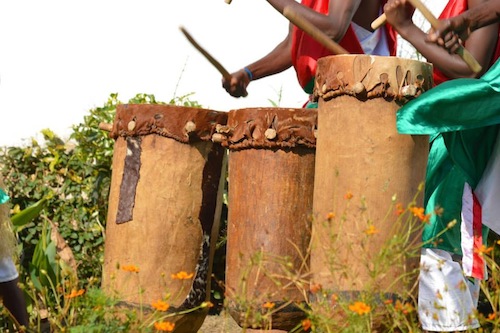 We were hosting a garden party at our home in Burundi this summer – the kind with drummers, dancers, a d.j. and a chef. Most all the guests mingled outside, holding fanta bottles and balancing plates loaded with rice pilaf and skewered meats. But inside, seated around the high-top table, Claude and his merry men leaned in and laughed hard.

The moment knocked the wind out of me… and I breathed in the Spirit.

I first visited Burundi in September 2001. I was there the day the Twin Towers fell. That was the day I saw what unbridled hostility looked like. A few years later Claude and I returned for the summer. I saw it with different eyes – an impoverished country with small white mosques popping up in the city, in the countryside. I saw a cocktail for terror.

During a meeting with local pastors we listened as they shared their grave concern about the increase of Islamic presence in their country. For them each Muslim embodied a threat to their faith and security. What would happen if their number grew? Their tense voices and worry-woven brows made it clear – they were afraid.

In retrospect, I was afraid, too.

Since that time more neighborhood mosques have emerged, dotting the dusty cityscape and punctuating the days with the call to prayer. And since that time Claude has befriended some Muslim neighbors.

Issa owns a local forex bureau in the center of town. He’s an honest businessman, a faithful family man and offers a gentle grin when you greet him. He’s also a devout Muslim. Ndipa operates a car business – buying, selling and renting. He stands tall above most men. He’s gregarious, a bit mischievous and a Muslim father who dotes over his children. On most days Claude visits Issa at work, meets up with Ndipa for a meal, and they’re always exchanging calls and jokes.

But this posse is incomplete without Rodrigue, a friend of Claude’s since before I knew him. Rodrique is the guy who’s always there, the fixer of the bunch. He’s smooth – the way he laughs, the way his smile steals across his face, the effortless way he gets you out of a jam. Once Catholic, now Evangelical… he’s always been a reliable friend.

Bahizi joined this group recently. He owns a top-notch construction company and regularly attends a Pentecostal church. He seems attracted to the good humor and good conversation, plus he shares their penchant for laughter.

What an odd collective, really. In a country where pastors and imams fear one another, these men are fierce friends. Issa invites everyone to his home during Ramadan – and they all come. Rodrigue gets married and they all attend, dressed to the nines. When I arrive at the airport Ndipa’s there to greet me and carry my luggage. These friends have become my Burundian family, the people who make me feel welcome – and safe.

So when Claude throws a garden party, they all come. They bring their wives and children and they plan to stay awhile. So seeing them together around a table, the Christians with their wine glasses full and the Muslims with goblets of fruit juice, was nothing novel. Except I recognized something new…

These men worked together to build a school in Bubanza alongside Claude over the past year. Issa helped with financing. Ndipa offered transportation of materials and workers more than once. Bahizi led the construction effort and Rodrigue worked with the Ministry of Education to secure the license so we could open the school on time. Together this unlikely group brought hope to a desperate place in their country. These Christians and Muslims didn’t fight; they collaborated. They weren’t afraid of one another; they were friends. These men decided hospitality trumped hostility.

And as I watched them, glasses raised and doubled over in laughter around that table, I saw what it looks like to melt swords and fashion plowshares. And I realized that these men disarmed my own fear. They showed me a more excellent way.