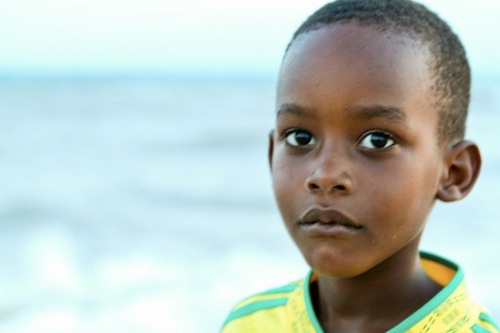 Today my son asked me about his birth mother – again. Why couldn’t she keep him? When you adopt, you must be all kinds of strong, tender and honest.

Best we can tell she abandoned him roadside, only days old, umbilical cord still in tact. She wanted him to be found, why else wrap him in her bright African block fabric skirt? I imagine her watching from the bush, waiting for someone to carry him to a better life. Another Moses, drawn out of hardship and delivered into the hands of another woman who never expected to become a mother.

Most likely his birth mother existed in the underbelly of the local economy, making due in the clutches of extreme poverty. It amazes me that she had enough food to sustain his healthy growth. But feeding them both on the other side of labor proved too daunting. I see the fear in her eyes – if he stays with me, surely he’ll die. So she orphaned him to open the door to salvation, or so she prayed.

My son knows his story. It’s his, and I cannot keep it from him. He’s heard how he’s like Moses – drawn out from an early death, adopted into a new kind of family, living a bicultural life that is both good and hard.

Still his thoughts often drift to her. He’s concerned about her poverty. He dreams of finding her and rescuing her from her troubles. Like Moses, he has deliverance tendencies already.

But he also mourns her relinquishment. How can leaving be anything like loving? Why didn’t she give him a chance? It’s hard to believe that letting go can be love; that giving him up can be giving him life. At random times he slumps over with sadness, wondering why his birth mother left him.

And so he comes close and let’s me dry his tears with my fingertips. He asks again, why? He listens again to the story of a birth mother who loved him so much that she made the most brave, hard and loving choice a mother ever makes. She chose life for her son. Then he buries his dark curls into my chest, holding me and holding her at the same time.

When he looked up at me again, I reminded him that I, too, have a birth mother. He nods.

We are the company of the adopted, the ones who know love is letting go as much as coming together. We learn early that love can push us to make gut-wrenching choices. We discover soon that love’s redemptive surge runs the length of our body and shapes our soul. We know love is thicker than blood; allowing a birth mother to sever biological ties and an adoptive mother to nourish maternal ties all in the name of love and life.

We are attached to these unknown women. We share their genes, but know so little of their stories. They are (and are not) part of us. They haunt us adopted ones, some more than others. My birth mother has been a faint whisper for me. But for my son, she is a loud presence in his life. She hovers over his heart provoking questions, curiosities and even insecurities. And so we embrace her together.

Some nights we lay side by side on his bed in a room only lit by a night-light, we hold hands and pray for our birth mothers. We send blessings, we speak words of gratitude for their love, we pray for them to find peace wherever they are in the world. In the company of the adopted, we practice a love wide enough to include our birth mothers.