Luke is one of my Deeper Story friends. His story intrigued me, as a vet turned peacemaker. His candor and thoughtfulness always kept me reading. So through storytelling, theological reflection and twitter exchanges with our tribe, I came to appreciate how Luke dares to wrestle with the hard things. And what better friend to invite to respond to The Prophetic Imagination?

I’m telling this story in two parts. The first I’ll be sharing here today with Kelley, and the second is currently on my blog. I hope you’ll stick around for the whole thing.

“Jesus knew what we numb ones must always learn again: (a) that weeping must be real because endings are real; and (b) that weeping permits newness. His weeping permits the kingdom to come. Such weeping is a radical criticism, a fearful dismantling because it means the end of all machismo, weeping is something kings rarely do without losing their thrones. Yet the loss of thrones is precisely what is called for in radical criticism.”

I was combing through all of my notes on Walter Brueggeman’s The Prophetic Imagination when I came across this highlighted passage again and read it over. Then I read it again. And again. And suddenly I realized that this one passage is a reflection of my own experience in a profound way, both tragic and beautiful.

But I suppose I’m getting ahead of myself.

In the text, Brueggemann is concerned with the role of the prophet, both in the Scriptures and in the context of our modern culture. His thesis is that “the task of prophetic ministry is to nurture, nourish, and evoke a consciousness and perception alternative to the consciousness and perception of the dominant culture [or “royal consciousness”] around us.” The first task of the prophet then, is to shake us from the “numbness” that the royal consciousness lulls us into. He says in the introduction to the second edition “numbness robs us of our capability for humanity.” Unfortunately, that numbness is something with which I am intimately familiar, but I’ll get to that a bit later.

Now, the nature of the royal consciousness is that it is the end result of a process of enculturation. So all of us, to one degree or another, participate in the perpetuation of the royal consciousness, whether we do so wittingly or unwittingly. It is the context within which we conceptualize our entire world. It is then, perhaps unsurprisingly, difficult to shake loose the bondage of this royal consciousness and the crushing numbness it carries with it. Brueggemann’s answer – typified in the witness of the weeping prophet Jeremiah, Second Isaiah and Christ – lies in grieving. He writes, “It is the task of prophetic ministry and imagination to bring people to engage their experiences of suffering and death.“ For some, that may seem like a somewhat jarring statement, but essentially Brueggemann’s point is that we are, in fact, dead already, that we have allowed the royal consciousness to bind us so tightly that we have lost the ability to feel anything real. Only a confrontation with the horror of the oppression, injustice and death that are the result of the power of the royal consciousness is sufficient to dislodge us from out apathy, and it is the prophet’s role, according to Brueggemann, to give voice to that confrontation.

Ultimately, the story I’m trying to tell here is about that confrontation in my own life, my own ongoing and ever-unfolding journey from numbness, to grief, to an absurd-and-ever-so-fragile hope. It’s a story that I’ve been trying to tell for a long time, but I simply haven’t had the frame of reference to even understand it, let alone the words to tell it. I’ve even read Prophetic Imagination before (twice!), but for some reason, this time through it resonated with me in a way it never has before. And when I say “resonated,” I don’t mean like a tuning fork or a violin string, I mean it more like how the seismic waves of earthquakes can resonate with the oscillations of particular buildings and shake them into dust, leaving nothing standing.

Earlier, I spoke of the numbness that results from the royal consciousness. Brueggemann refers to it specifically as a numbness toward pain and death, the end results of royal oppression and injustice in the world. As a former soldier, I was a symbol of that numbness. I was impervious to and even indignant toward the pain and suffering that I witnessed and participated in as an enforcer of the royal consciousness. Violence was my primary mode of interaction with the world and those in it, and I saw nothing wrong with that. And in fact, the imperial religion of the United States fully condoned (and in many ways enthusiastically supported) my crusade for the sake of its own security, and I returned the favor. Where imperial religion was interested in, as Brueggemann puts it, “the establishment of a controlled, static religion in which God and his temple have become part of the royal landscape, in which the sovereignty of God is fully subordinated to the purpose of the king,” I was happy to play my part in maintaining the status quo at all costs, whenever and wherever it was challenged.

But somewhere, something changed.

What’s really important here, I think, is that this *in and of itself* is a rejection and refutation of the royal consciousness, which constantly screams in our ears:

I heard that refrain constantly and yet…

That same capacity for newness, I believe, that was manifest in the incarnation of God in Christ has-and-is doing a redemptive work both in-and-through me, in spite of the lies the royal consciousness would have me believe.

But this redemption comes at a cost. As Brueggemann highlights, “…the guardians and profiteers of the present stability are acutely sensitive to any change that may question or challenge the present arrangement. Very early Jesus is correctly perceived as a clear and present danger to that order, and this is the problem with the promissory newness of the gospel: it never promises without threatening, it never begins without ending something, it never gives gifts without also assessing harsh costs.” In Christ, the cost was death on a cross, without which He (and we) never would have experienced the radical dismantling of the universe that came with the Resurrection. For me, it was the complete and utter destruction of an identity that had been wholly formed in the crucible of the royal consciousness. If you’ll forgive an indulgent pop culture reference, as Tyler Durden said in Chuck Palahniuk’s Fight Club, “Only after disaster can we be resurrected. It’s only after you’ve lost everything that you’re free to do anything. Nothing is static, everything is evolving, everything is falling apart.”

And so, I was undone. I am undone.

The numbness that has been my veil of protection against the horrors of injustice and oppression was torn away like a bandage from a not-yet-healed wound, and the pain often seems unbearable. At first, everywhere I looked I was confronted with my own enthusiastic participation in and benefit from the work of empire. From as close by as my own family and my own neighborhood to as far away as the nameless, faceless victims of Western military and economic hegemony in the global south, I saw the consequences of my numbness and apathy. I wept for no reason and for every reason. It was as if some floodgate had been opened, and in stark contrast to the numbness that I had felt (or perhaps more accurately, had not felt) for so long, I was like a burn victim whose every nerve ending was raw and exposed, with even the faintest movement of air causing the most exquisite anguish.

But as Brueggemann puts it, “If we are to understand prophetic criticism, we must see that its characteristic idiom is anguish and not anger.”

As I was processing all of this through this week with Kelley and some others who are participating in the conversation about The Prophetic Imagination, we decided that weeping wasn’t a strong enough word. Even groaning or wailing doesn’t quite capture the depth of this pain. It is as if in these moments we are hearing the softest whisper of or catching the faintest glimpse of the pain of a God who desires to be reconciled to Creation. Even that glimmer though is often enough to take us to that dark place of suffering and grief, where the Old Way is violently dismantled and put to death to make way for the newness of a God who still very much cares about and participates in the act of Creation.

More often than not, they’re all I have. So I embrace them.

One of the critical tasks of the prophet, according to Brueggemann, is to “provide symbols that confront the horror of experience that leads to denial and that are adequate to contradict a situation of hopelessness.” As an enforcer of the will of the royal consciousness, I was a symbol of both its power and its hopelessness. My hope is that in embracing this grief-as-radical-prophetic-criticism, I might become a symbol of the newness God wants for creation. That I can have hope is a testament to the power of that capacity for newness.

So I hope in the midst of grief. It’s absurd and idealistic and naïve and all of those things that the royal consciousness tells me it is.

But it’s all I have.

And I’ll take the absurd hope of the Kingdom of God over the despair and hopelessness of the royal consciousness any day.

<< Remember to follow over to Luke’s place HERE to read Part Two! >> 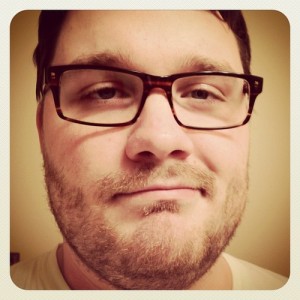 Luke is an ENFP who hates writing bio’s in the 3rd person. He’s an analyst to pay the bills (a constant challenge for his non-linear brain), but his real passions revolve around being married to Jill, and raising Thing One (Ethan, 3) and Thing Two (Asher, 1).  He writes over at Living in the Tension (sporadically, due to the demands of the aforementioned Things) where he wrestles with everything from faith to family to philosophy, and does it all through the lens of what it means to be a follower of Christ in his life, his work and his family. He’s thirty-smhershmer years old, still loves punk rock and has famously never turned down a rice-krispies treat. Blog: lukelivingthetension // Twitter: @lukeharms

<< Also remember that if you want to link up your reflections on The Prophetic Imagination, you can do so HERE. >>