His life matters – world peace may hang in the balance 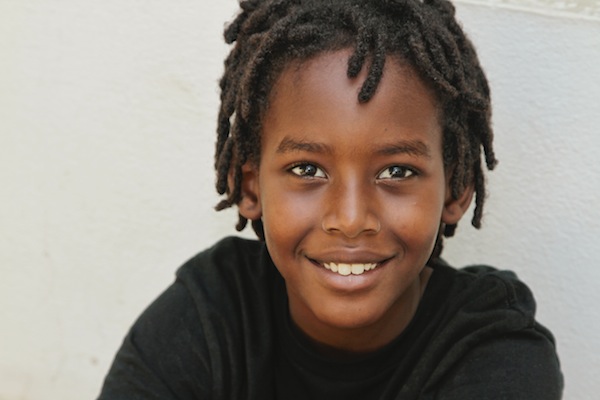 This is my son. He’s ten years old.

How sad that I feel the need to document the obvious. But the last set of days this thought has permeated my thinking. In the months prior, I’ve been grateful he is currently living overseas where his color isn’t a factor in how his neighbors perceive him. I seldom say this out loud because people, mostly white people, accuse me of over-reacting or misreading the context or being too liberal in my reaction. But as a mother to this stunning ebony-skinned boy, I cannot ignore how other such sons are treated in my homeland.

My son’s heart and countenance are bright. He possesses a deep well of compassion for others – family, friends, the Batwa people of Burundi, the Palestinian people of Gaza. Under his smooth skin and banana-shaped dimples beats a tender heart, uncalloused by hate, hurt or racism. He is, as his favorite dancer Michael Jackson said, a lover not a fighter. “I love you, mama” he volunteers nightly.

When we go out for our dates, just the two of us cloistered at a table in a favorite restaurant, he gets to set the agenda with questions. And he gives me a glimpse into his heart – and he never disappoints.

The first time, over burgers and fries at In & Out Burger, he asked about the plight of the Batwa people in Burundi. “Why are they mistreated and forced to live in bad places?” he inquired with his characteristic intensity. We spoke of human rights, identity cards, tribalism and marginalization. That’s when he learned God transforms land and lives – and was already at work among our Batwa friends. “I’m glad they are our friends, mama.”

Another date, this time feasting on beef brochette, brought out his creative and curious side. “Mama, let’s dream about inventions to solve big problems.” I envisioned a cure to AIDS. (I had to explain what HIV/AIDS was, first.)

He imagined a car that traveled at the speed of light so that we could be together whenever we wanted, despite the distance that we endure as a bi-cultural family. We decided to call it the SOL car. He giggled at the thought of such a car, designed like a Ferrari with race car stripes, that would allow him to come over for dinner (especially on nights I made his favorite mac n’ cheese or pesto, he noted). I told him I’d use the SOL car on nights he wanted to talk about his birth mom or hear another Jesus story before bedtime. The SOL car would bridge the distance between mother and son…

Just last month we enjoyed our most recent date at our favorite bakery in Burundi. Over mango smoothies and chocolate croissants we talked about his chosen topic – Palestine. For two and a half hours we retraced the history – the 1947 UN Partition decision, the creation of the state of Israel, the 6 Day War and the intafada(s)… and the current blockade and incursions he witnessed on the news. His vocabulary grew to include Shoah  and Nakba. We talked about the God who is on the side of the oppressed and near to the broken-hearted, the God who does not allow us to hate enemies, and God’s image in the face of each Israeli, each Palestinian.

He peppered me with questions: Is the Israel of the Bible the same as the Israel country? Is America using it’s most powerful military to help the people in Gaza? Why is there an actual wall around parts of Palestine? Were the people of Palestine invited to the meeting about the UN Partition? Can we go there and help?

Finally he declared, as he slurped the last of his smoothie, “Once I’m done being a soccer star like Messi, I think I’ll go to Palestine and help bring peace like Jesus does.”

My son stretches his imagination toward peace, toward innovating solutions, toward brokering friendships. He dreams of playing soccer for Liverpool and inventing the SOL car and, as if in his spare time, bringing a lasting peace to Palestine and Israel.

But he is, after all, ten years old. He is given to fits of silliness and immaturity as any boy his age. He has more energy than his slender frame can really contain and an impulsive streak you don’t see coming. Growth spurts in rapid succession ensure he is taller every time I look his direction, but maturing happens in more subtle and slow movements. And I cannot afford to have his immaturity, impulsivity or silliness let loose on American streets – because  those very things can endanger his life. And I don’t want to become the next bereaved mother clutching a picture of her son in the middle of the street.

But he has something amazing to contribute to this world and…

It might even matter to world peace – if his heart for the dispossessed is any indication. So label me if you must. But include in that moniker “a mother who believes in the potential of her son and the value of all the other sons of other mothers like me.”